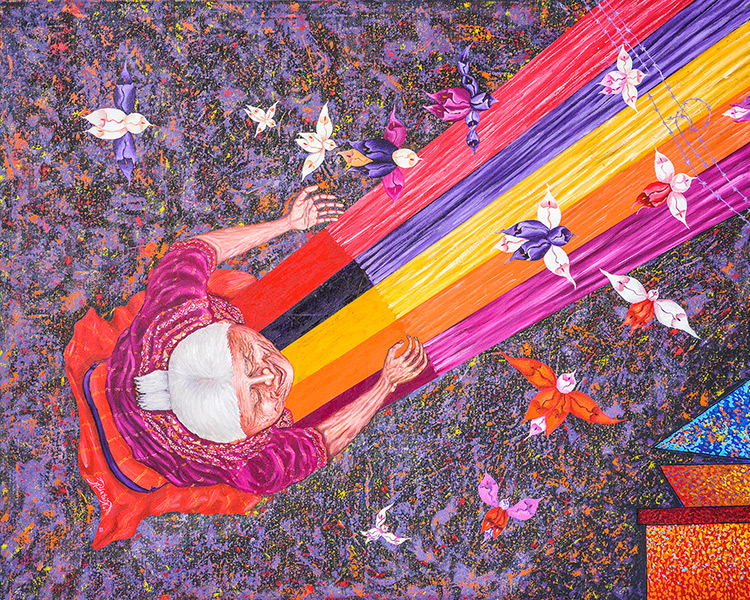 “Emigration is very a painful and profoundly sad topic,  yet it is something that seems to never end. It is the result of wars that destroy the families.
The inspiration for my painting is a WOMAN knitting the paths of emigration.

WOMAN
Mother
Widow
Grandmother
They just look at me
and they do not ask themselves?
I have been alone
for 40 years
fruit of the war.
My husband was killed
my daughter has disappeared
and my two sons
emigrated to the north.
Since then
I have not seen them
I keep on waiting for them
as long as there is hope
I keep on knitting
as long as the time goes on
I keep on knitting
the memories of yesterday
to bring them to the present
to leave them for tomorrow
that they would not be
forgotten.”

Abraham Batzin (1964) is one of the most famous painters of Arte Naïf (Naive Art) in Guatemala. He currently lives in Quetzaltenango. Apart from his activity as an artist, Batzin contributes to social initiatives helping to improve the life of the Mayans by supporting the schools for the children with limited opportunities and the Foundation ‘Habitat para la Humanidad’ (Home for Humanity).

Batzin has exhibited his work both in Guatemala and abroad and won numerous awards. His works of art play with the traditional elements of Mayan culture. He is famous for introducing the “aerial view” in his paintings – the objects are often painted from above, like in the “bird’s eye“. He is one of the artists presented in the book ‘Arte Naïf: Contemporary Guatemalan Paintings’, published by UNESCO in 2001.